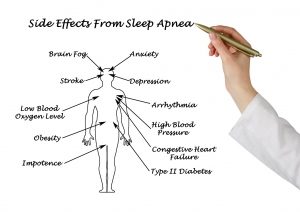 Do you wake up feeling tired, sleep deprived, and irritable?

You could be suffering from Sleep Apnea.

Individuals with sleep apnea stop breathing for short periods of time when sleeping. According to the America Lung Association, pauses in breathing can last just a few seconds to a few minutes, and occur as little as 5 to as many as 30 times per hour. Obstructive Sleep Apnea (commonly referred to as OSA) is an obstruction or collapse of the airway, which impacts your breathing during sleep. With little to no air flowing to your lungs, there is a decrease in oxygen levels in the blood. Therefore, it comes as no surprise that sleep apnea is a debilitating and life-shortening condition that can impact not only your life but livelihood.

The World Health Organization estimates 100 million individuals across the globe suffer from sleep apnea. In fact, an American Sleep Apnea Association report states that sleep apnea affects 1 in 4 men, particularly African-American and Hispanic men, and 1 in 9 women across the United States. Therefore, it is estimated that between 50 million and 80 million Americans have sleep apnea. In addition, it is speculated that close to 80 percent of all sleep apnea patients remain undiagnosed, causing people to potentially battle a host of life-threatening health risks such as high blood pressure, stroke, heart attack, and heart failure.

The main types of sleep apnea are:

What Happens During an Apnea?

If you have OSA your soft palate sags and the tongue relaxes as it slides backward which can partially or totally obstruct your airway. Obstructive Sleep Apnea can occur in varying degrees of severity from mild to moderate to severe. Whether your airway is narrowed, partially collapsed, or obstructed, snoring may (but not always) occur. If your airway is blocked, the oxygen levels in the body fall. As a resulting defense mechanism in the brain, your body is triggered to resume normal breathing once again by gasping or awakening. This constant arousal (many people do not fully awake) does not allow the body to get into the deep restful / recovery sleep the body needs.

Factors That Increase the Risk of Sleep Apnea

What Happens to Your Body When You Don’t Get Enough Sleep?

According to the U.S. Centers for Disease Control and Prevention 30 percent, (roughly 40.6 million) American adults are sleeping six (6) or fewer hours a day, and night shift workers, particularly those in transportation, warehouse and health care industries are at the most risk of not getting enough sleep. Less sleep, coupled with potential sleep disorders can create health problems, such as:

How is Sleep Apnea Diagnosed?

One of the fundamental problems facing individuals who might suffer from sleep apnea is their lack of awareness of the condition and its symptoms. Hence, it is vitally important that any person experiencing sleep apnea symptoms receives an accurate sleep disorder diagnosis from their healthcare provider. If you feel you or your partner may have sleep apnea, call Comprehensive Sleep Care to schedule a consultation with one of our sleep medicine physicians.

One of the most common methods used to diagnose sleep apnea is a sleep study, which may require an overnight stay at one of our sleep centers or possibly an at home test kit.

Is it Dangerous to Leave Sleep Apnea Untreated?

If your sleep apnea is left untreated, you will continue to experience disrupted sleep and fatigue that can have very negative impacts on your overall health. With lack of restful sleep, it is likely you may have difficulty with concentration, reasoning, and reaction timing. What you may not realize is that you are at a higher risk to develop other health problems, such as high blood pressure, heart attack, stroke, type 2 diabetes, and even experience accidents at work or behind the wheel of your car.

Get It Checked Out

If you suspect you may have sleep apnea, the first thing to do is schedule a consultation with your doctor or one of our sleep medicine physicians here at Comprehensive Sleep Care Center. The good news is that sleep apnea is an easily treatable condition – solutions are available that can help you rest easier, feel better during the day, and reduce your risk of potentially dangerous health complications